A pushup by any other name…

I’m going to write a phrase and I want you to visualize a matching image.

You thought of a knee-down push up, yes? 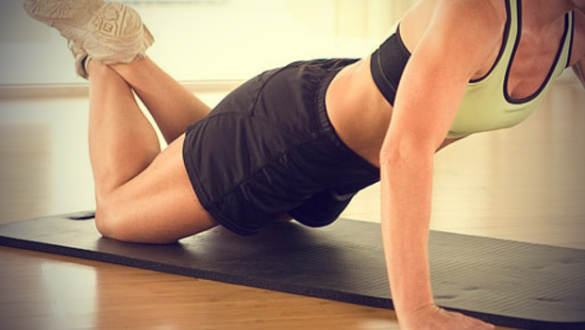 Have you ever used this term? I have. I used it before I really understood what I was saying. Girl push up means knees down push up. Because girls are weaker than boys. This was ingrained into me at such a young age I never even thought to question it until I was well into my adolescence.

Women do usually start from a disadvantage when training push ups. Men are genetically predisposed to higher strength development, particularly in the upper body. Women typically begin at a lower starting point in strength with respect to their upper body (whereas they typically begin at an equivalent or sometimes higher starting point in the lower body) relative to their male peers. But that doesn’t mean women cannot train their systems to perform multiple sets of standard push ups with good form.

Push ups are a difficult exercise to master. They require full body strength, with a specifically high demand on shoulder girdle and abdominal musculature. Most of the individuals I’ve worked with over the last 15 years have not been able to perform a push up correctly. They lack sufficient strength, mobility, muscle balance, or neuromuscular control and require some form of modification in order to eventually perform a push-up without pain or problem.

Calling a knee-down push up a “girl push up” not only demeans girls and women, implying that they aren’t capable of developing upper body strength, but it also insults anyone who doesn’t identify as female who needs to perform a modified push up. Most of all, it’s wrong because it equates being female with being lesser, or substandard. For this reason more than any other, you should eliminate this sexist and unproductive phrase from your vocabulary.

What we should be considering is the appropriate level and variation on the push up we use to help us meet our goals. A knee-down push up significantly reduces the leverage demand on the abdominal musculature, which might be good for a person just starting to address their musculoskeletal wellness, but progression should not end there. For example, once my patients can demonstrate good alignment and control with an unmodified plank, I quickly move them on to negative push ups, which is one of the fastest ways to build strength safely. This exercise focuses on a controlled, slow lowering phase. Since muscles output more force as they elongate slowly, negative push ups build strength rapidly, regardless of one’s sex.

You can apply this idea of a “negative” to any exercise. It can provide some variety for a well established exercise program or challenge strength in new ways. I’ve done negative push ups, pull ups, biceps curls, dips, and squats, in order to be able to perform all of those movements without need for modification. I’m a more balanced athlete and human being because I left my ego at the door when I trained, and worked hard at the level that was appropriate for me, rather than worrying that doing a modified exercise somehow made me less of a person. Not surprisingly, it allowed me to progress as quickly as my body allowed without risking injury.
You are not a lesser person if you need to perform modified exercises. Just call them what they are: modified. Let’s leave gender out of this.