Ever found yourself feeling off balance, dizzy, woozy, like the world is spinning? It can be really disorienting.

How do we know which way is up? The body has three systems which work together through a network of nerves connecting different parts of the brain to tell us where our body is in space.

Where the loops meet up are two compartments, called the utricle and saccule, which are in charge of gauging motions up, down, and sideways. They sense this motion with movements of bone crystals embedded in gelatinous plates wiggling back and forth over sensitive hairs. Imagine the crystals are like sprinkles embedded on the top of a cube of Jell-O jigglers. When you pull the plate of Jell-O toward you quickly, it won’t all move at the same speed. The top part of the Jell-O lags behind a bit and then catches up. The weight of sprinkles on top accentuates this lag.   A similar motion in utricle and saccule is used to sense when the head is moving in a straight line and calculate how quickly it is moving, linear acceleration. 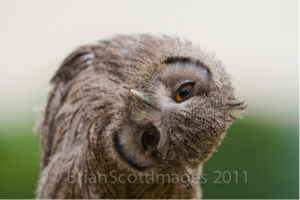 The vestibular system is linked to our eye muscles through a series of nerves through the brain. This connection, which causes our eyes to move in the opposite direction of our head, is what allows us to fix our gaze on a target and keep it there despite head movement. It’s called the vestibular-ocular reflex. This reflex enables a soccer player to keep their eye on the ball while darting around an opponent.

Animation of the vestibular system: https://www.youtube.com/watch?v=YMIMvBa8XGs

United we stand. Ideally all three of these systems (your sight, sensations in your joints and muscles and your vestibular system) give the same message of which way is up and whether you are moving. Sometimes the systems give conflicting information, causing you to feel off balance or dizzy.

For example, if you’ve ever made the mistake of going to a spot on a boat where you couldn’t keep track of the horizon while the boat was being tossed in the waves, you may have experienced seasickness. Seasickness happens when you and the boat move together in unison. Your vestibular system senses that the boat is being tossed about and sounds the alarms but your eyes can’t see it because your body is not moving too much relative to your visual surroundings. The mismatch of sensory information often means it’s time to grab a bucket! Eventually, if you stay on the boat long enough, you’ll get what is referred to as “sea legs”. This is what sailors call it when your vestibular system adapts to the constant rocking motion of a boat. The vestibular and visual systems determine this mismatch to be your “new normal”, and the vestibular system resets, ignoring this background motion so that the eyes and vestibular system can give the same message. Once that happens, it can take a little while to switch back to land legs.   When you first walk on solid ground, it’s not uncommon to still feel like the world is swaying under your feet while the vestibular system adapts back again.   Though disconcerting at the time, it is proof that the vestibular system is really quite amazing!

A sensory mismatch isn’t always just an optical illusion like being on a boat without a view of the horizon. Sometimes it means there’s a problem with how the vestibular system is functioning. Depending on how it’s malfunctioning, it can cause people to use a myriad of descriptors to say: I feel off balance!

What do I do about it?

People often find themselves at a loss for what to do when they feel off balance.   It can be disorienting and kind of scary! You’ve come to the right place.   #GetPT1st   Physical therapists can diagnose and treat vestibular problems*. Because the vestibular system is so closely linked to eye movements, you can expect a physical therapist to do an eye exam in addition to some balance testing. During this exam they will carefully watch your eye movements both with and without head movements to determine just how well your vestibular apparatus and the nerves that connect it to the eyes and the brain are working.

Sometimes the problem is strange, but has a simple solution. Remember the crystals on top of the Jell-O? Sometimes one of the crystals gets dislodged and ends up in one of the semicircular canals. Just like a rock rolling in a river, it will continue to tumble about in the fluid after your head stops moving. This causes the sensation of the room spinning, vertigo, and causes the eyes to move rapidly in a beating motion called nystagmus. This condition is called benign paroxysmal positional vertigo, or BPPV for short. Through the eye exam the physical therapist can figure out which canal the crystal fell into. By leading you through a series of head movements they will roll it all the way through the canal until it pops out, lands back where it belongs, and quits making you feel dizzy.

A physical therapist skilled in evaluating and treating vestibular disorders will know when to refer you back to your primary care physician, a neurologist or neuro-ophthalmologist for further assessment.

*All licensed physical therapists in the US have had training in evaluating and treating vestibular disorders, but like many things, if you don’t use it, you lose it! Sometimes that training gets pushed into a corner of the brain called the hippocampus and gets covered with cob webs and buried under boxes of memories. Schedule an appointment with a physical therapist who is experienced with vestibular assessment and treatment and be dizzy no more!